In this doc, we'll show how to import data from your local qri repository into a Jupyter notebook for analysis.

Qri stores data in a local repository. Once you've installed Qri CLI, you can pull down any of the thousands of datasets on qri.cloud with a single terminal command.

You can also do the dataset pull from your python code. Read on!

You can quickly pull any dataset from Qri Cloud by running a cell with qri.add()

This line will pull the popular COVID-19 Data Repository by the Center for Systems Science and Engineering (CSSE) at Johns Hopkins University, which has been published and kept up-to-date on qri.cloud by user @xristosk

qri.add() pulls a dataset from qri.cloud to your local qri repository

Get the Dataset's Body

If you are new to Qri, each dataset is made up of components, and the one with all of the data in it is called the body. This is what we’re going to want to work with inside of a Jupyter Notebook. When you use qri.get(), qri-python grabs the body of a dataset and turns it into something familiar in the data science world: a Pandas DataFrame.

qri.get() imports the dataset's body as a dataframe

Sometimes we might not need all of the data in the body of a dataset; maybe we just need a chunk of it, or maybe you’re someone who is more familiar with SQL than they are with Pandas. Qri-Python has a sql() method to help out with that. In this example, we want to select only cases in Italy. 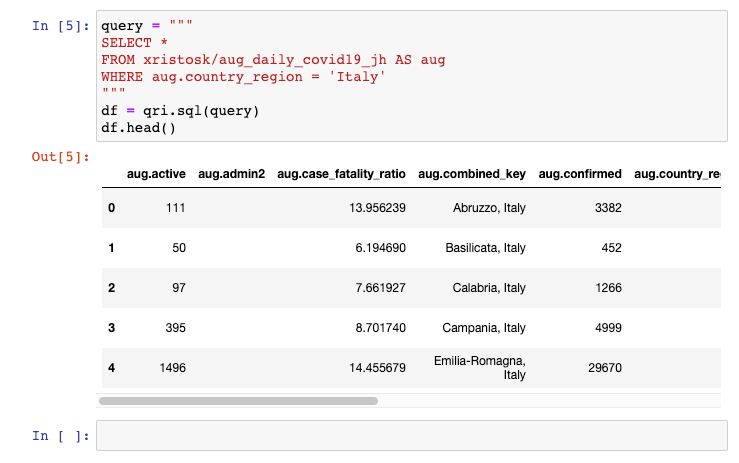 qri.sql() allows you to filter, join, and mutate data with a SQL query

Using qri-python, you can use datasets from Qri Cloud directly inside of a Jupyter Notebook. It’s a quick way to fetch data you need and jump right into your analysis and visualizations.

Have you tinkered with qri and python? We'd love to hear from you. Drop us a line on twitter or hop into our public discord.